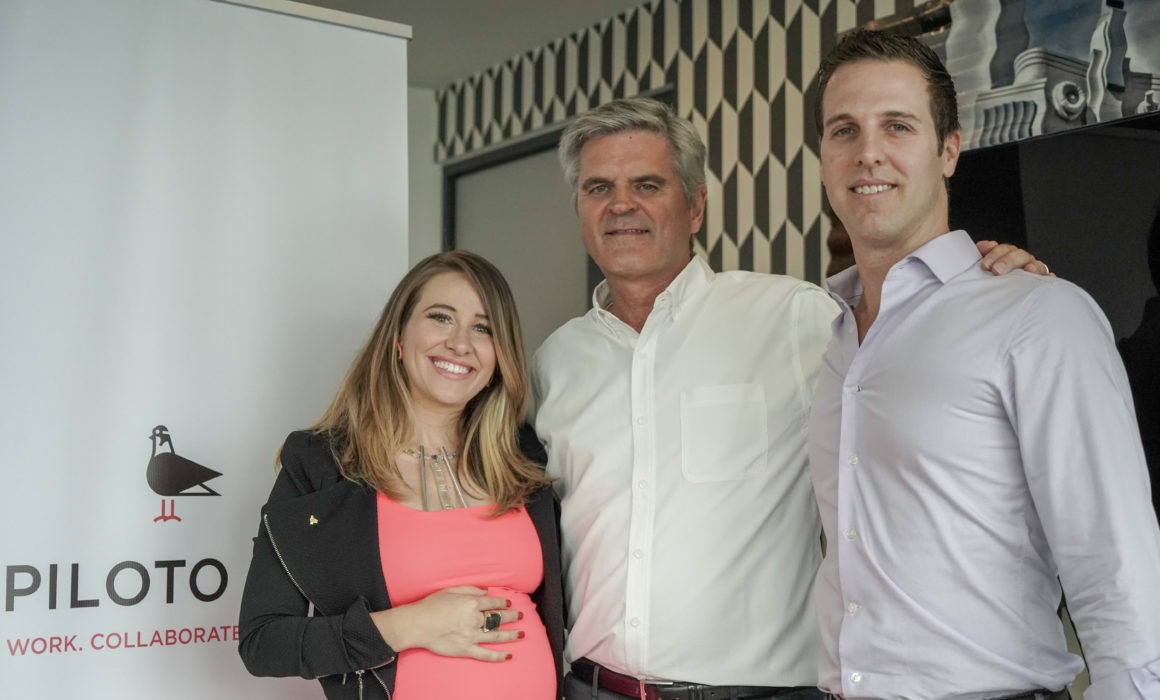 We’ve been part of the startup and tech entrepreneurship ecosystem in Puerto Rico for over five years now and, in many ways, have helped shape it.

When we first launched, we had to do a whole lot of explaining about the concept of coworking, a concept which we now all thankfully take for granted. At the time, we started putting on weekly and monthly entrepreneurial events for the tech and startup community and, at first, it was all the same people in the room. And then, something magical started to happen.

Our events started getting filled with people we had never seen before: professionals eager to start their own companies, entrepreneurs looking to reinvent themselves after acknowledging that their business models were not recession proof, students facing a much tougher job market. All fueled by the same idea that they too could launch or grow their businesses from Puerto Rico in spite of the fiscal crisis.

Fast forward 5 years, thousands of events later and a category 4 hurricane that shook the entire business and entrepreneurial community to its very core, there is now not an ounce of doubt that our ecosystem today is stronger than ever, it’s hurricane strong.

Here are 3 things that we know to be true and that Steve Case and his Rise of the Rest Tour (ROTR) will be sharing with the world about our ecosystem:

1. Our ecosystem support organizations collaborate more and refer more entrepreneurs to each other than most ecosystems.

In recent years we have welcomed new ecosystem players including Parallel18, Centro para Emprendedores, Colmena66, and Endeavor Puerto Rico, to name a few. Longer standing entrepreneurship organizations like Grupo Guayacán have revamped existing programs and launched new ones. All with the result of being able to provide entrepreneurs at every stage — from micro-entrepreneurs to high growth ventures — world-class programs and support to fuel their growth.

But the most impressive thing about our ecosystem is the strength of the interactions that occur among its players. Thanks in part to the incredible work of Colmena66 [check out their 2018 Impact Report], a program of the Puerto Rico Science and Technology Research Trust which Piloto 151 helped found, we know that close to 6,000 entrepreneurs were connected to a support organization during 2018 and that we referred over 1,000 entrepreneurs to each other. Collectively, we carried out over 2,000 entrepreneurial events, which means that now entrepreneurs can choose from multiple events occurring on any given day, something that certainly didn’t occur 5 years ago. And, even though we carry out many of our programs and events in partnership with one another, El Junte, as a group of us has come to be called, regularly meets to attempt to solve our ecosystem’s most pressing needs or partner to tackle big opportunities together. Suffice to say, the investors and influencers that Steve brought with him on his tour were more than impressed, with many of them pointing out they hadn’t seen that level of collaboration amongst entrepreneurship support organizations anywhere else.

2. Our entrepreneurs are killing it.

Over 100 entrepreneurs applied to pitch for the chance to win $100,000 in prize money from ROTR. The 8 entrepreneurs that got up on stage– Brainhi, PRoduce, Abartys Health, Burea, Agrobeads, CINCO Engineering, ALL_EBT, and keyband — to deliver their 4-minute pitches were world-class in every sense of the word. They spanned every industry from healthcare to agro-tech, wearables and market research. They had all passed through at least one of our ecosystem’s accelerators or programs — many having gone through more than one — and delivered thought out and polished pitches. They had traction, with the majority of them exporting their products and services. If you closed your eyes and simply listened to them pitch, you could have imagined these entrepreneurs pitching at a major tech hub like Silicon Valley or New York City, instead of the breezy indoor courtyard at San Juan’s Museum of Contemporary Art.

3. More investors than ever before are paying attention and choosing to invest in Puerto Rican startups.

One of the stops of the ROTR Tour was at Piloto 151’s Santurce location. We held a meetup for local investors to meet the ROTR team and get familiarized with the Revolution funds, which co-invest at the seed, early stage and growth stage of entrepreneurial development. With the rise of the new entrepreneurial class on the Island, the non-traditional financing ecosystem has also grown, following suit. There were easily over 50 people at Piloto that day, representing over 10 different investment groups. Puerto Rico now has more individual angels, angel groups and funds than ever before, which have invested in companies at every stage, and quite a few startups in our ecosystem have attracted capital from outside of the Island. In the last couple of years, we have even witnessed the first two startups in our ecosystem — Abartys Health, which also won the $100k pitch competition, and Brands of Puerto Rico — raise over $1 million dollars in venture funding. Steve Case and his team scouted the Island before deciding to make San Juan one of their tour destinations. They clearly saw what we’re seeing: there are exciting and investable companies in Puerto Rico.

The tide is definitely turning. We’ve come a very long way as an ecosystem in the last five years and our vision of creating a community where entrepreneurs from all backgrounds and walks of life could not only grow but also thrive creating extraordinary value, jobs, and economic prosperity for our Island is becoming a reality.

There’s never been a more exciting time to launch and scale a company from Puerto Rico and we believe that someday, in the not so distant future, we will become a world-recognized major tech and entrepreneurial hub, capable of both spawning and attracting high growth ventures on a sustainable basis.

Frances Morales has always enjoyed working behind the camera, setting a scene and capturing the perfect shot. At the University of Puerto Rico (RP), she got her degree in Audiovisual Communications. She’s also an English major and got her MA in English Linguistics, as she appreciates language structure and wanted to have the right tools to help people understand how they can better communicate through language.

She dreams of traveling the world to expand her knowledge of food. (So, yes, she loves to eat, especially drink bubble tea.) She’s also proud to be a soap aficionado (hello, Lush); obsessed with things running smoothly and efficiently (hellooo planners); and a dog lover.

Chana Geller is a creative spirit whose talents span from graphic and industrial design to entrepreneurship and culinary endeavors.
Born and raised in Puerto Rico, and traveling to places near and far strengthened her fascination and love for different cultures and experiences. After studying in Parsons School of Design and Pratt institute in Paris and Manhattan, she worked in various design studios, showrooms, and jewelry and toy stores.

This introduced her to different industries along the way, giving her a profound appreciation for all their unique demands and intricacies.
Chana enjoys baking in her free time as well as producing art and design projects, spending time with family and friends, eating delicious food, traveling and discovering the many breathtaking wonders her native island has to offer.

Stephanie Drew is a creative and storyteller with experience in digital media, content strategy, branding, graphic design, and events. After receiving her BA in PR and Advertising and her MBA in Marketing at the University of Puerto Rico, Río Piedras, she worked in the nonprofit sector as in Communications producing digital media and content. At Piloto 151, Stephanie is a news junkie hungry for information, staying up to date with all things creative and all for creating a local entrepreneur community.

She is an optimist about the world we can create with the perfect combination of individuals, organizations, and ideas. Her favorite things are good company, moments of pure laughter, traveling the world and visiting new places, enjoying good food, art, nature… basically finding happiness in the simple things in life. This mega foodie and amateur cook is a supporter of all things local.

Sara is an italianriccan architect and lighting designer that grew up between Italy, NYC and Puerto Rico. With an academic background in Architecture from the University of Rome and a Master Degree in Lighting Design and LED technology from the Polytechnic University of Milan, Sara has successfully completed retail and residential projects in Rome, Milan, New York, Miami, Boston, San Juan, Hanoi and China. After spending her last decade between Europe and the US she has recently joined the Piloto151 family as Chief of Architecture and Design for both Piloto151 and Piloto White Label.

With a passion for music, hound dogs and art shows, Sara is a frequent flyer so when not in a construction site or in her design studio you can probably find her in an airport waiting to catch a plane.

Kathia Toraño is a Certified Public Accountant with a passion for providing small businesses and corporations with strategic financial and business management tools that allow them to succeed. After over a decade of working with companies in New York City, Cincinnati, and Los Angeles, Kathia returns home to Puerto Rico and joins the Piloto 151 family.

Loyal and OCD to a fault, Kathia balances her strength of character through her love for yoga, the beach, and her family. She enjoys traveling, meeting new people, and exploring foreign cultures.

Sofía Stolberg is a serial entrepreneur, mentor and entrepreneurship ecosystem developer with experience across diverse industries and international markets. She is the CEO of Piloto 151, Puerto Rico’s first coworking space and growth platform for entrepreneurs, recently recognized by the US Small Business Administration and the White House as one of 50 organizations nation-wide developing the most innovative programs for high growth potential entrepreneurs to thrive. Her most recent venture is Codetrotters Academy, the first hacker school in Puerto Rico and the Caribbean, committed to training the next generation of coders and innovators on the Island. As an ecosystem developer, Sofía has helped strengthen underdeveloped entrepreneurial and startup communities internationally. She co-directs the Founder Institute Puerto Rico chapter and has previously collaborated with Babson College, leading and advising international multi-stakeholder entrepreneurial initiatives (including Manizales-Más and Scale-up Milwaukee) to support and accelerate the development of high growth ventures. Sofía has also provided consulting services to local and multinational clients in the financial, insurance, consumer-based products, and oil and gas industries in countries across Latin America, the US and Africa.

In her spare time Sofía provides mentoring to startups and entrepreneurs in Puerto Rico and abroad, and serves on the Board of the Puerto Rico Creative Economy Initiative and the San Juan Tech Meetup. She is also the Founder and Chairwoman of Piloto Labs, a non-profit organization dedicated to strengthening Puerto Rico’s startup and tech community. Sofía is frequently invited to speak at international entrepreneurship conferences and acts as judge at game jams and hackathons. She holds a Bachelor’s Degree from Columbia University and a Masters in Economic Development Management from the London School of Economics. She enjoys dancing (mostly salsa and tango), cooking, extreme sports, contributing to her family’s art collection, and reading Latin American fiction novels.

Prior to starting his own law firm in 2011, Mr. Stolberg was an associate in the Corporate, Capital Formation and Securities Law Department of Tannenbaum Helpern LLP in New York City. His practice at Tannenbaum Helpern LLP involved assisting in the structuring of a broad range of transactions, including, among other things, asset and stock acquisitions, private placement offerings, art investment funds, distribution of tangible goods and franchise offering circulars.